The depot at Old Reston Avenue looks like it is finally restored. For years its foundation was crumbling and the building sagged. It now has a new foundation, floor, door, and paint. The Park Authority has yet to announce their plans for this building. One trail user suggested that it should be open on weekends housing a volunteer historian that would talk about railroad and trail history. Another user suggested that the Friends use it as concession stand to raise money for trail improvements. Perhaps the Park Authority should hear more ideas? 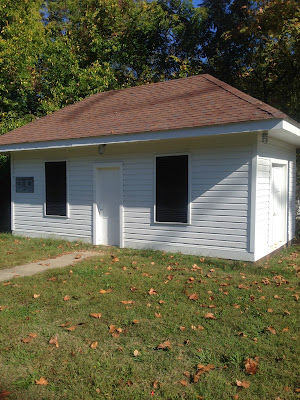 Clearing of invasive plants along trail

"A portion of land along the W&OD Trail near Bon Air Park may look rather rough after having been stripped of plant life over the past few weeks. But it’s actually part of the county’s plan to restore the land." See Arlington Now article at http://www.arlnow.com/2013/10/04/land-restoration-project-along-wod-trail/
Posted by Jeff Heil at 10:40 AM

Jogger and Cyclist Suffer Life-Threatening Injuries in Trail Crash Posted: 02 Oct 2013 12:14 PM PDT By FALLS CHURCH CITY OFFICE OF COMMUNICATIONS and FALLS CHURCH TIMES STAFF October 2, 2013 A jogger and a cyclist, both enjoying the Falls Church City section of the Washington & Old Dominion Trail, collided on Sunday near Little Falls Street and suffered life-threatening injuries, police say. The incident occurred shortly after noon. It remains under investigation, but initial reports received by police say it happened when the jogger attempted to pass people walking and was hit by a cyclist traveling the opposite direction. Both are still being treated at local hospitals. Falls Church City Police Chief Mary Gavin announced the additional deployment of bicycle and motorcycle officers along the trail to promote education and enforcement of park and traffic laws. Officials say an increase in usage of the trail, from casual walking to commuting via bicycle, has created more risk for hazards and accidents to occur. Another possible reason the risk is rising is the frequent failure of many users to follow the trail rules. Cyclists frequently ride too fast and weave in and out of pedestrians, and some pedestrians walk on the wrong side. "I am deeply worried and afraid for my safety when I am on the trail and users are not following the rules," said Cricket Moore, an avid trail user and City resident. In response to the influx of concerns, Falls Church Police were awarded a $2,400 safety grant from the Virginia Department of Motor Vehicles specifically to deploy officers for traffic education and enforcement in shared-use areas such as the W&OD Trail. City Police encourage the safe use of the trail and emphasize that traffic control signs, including stop signs, are in place to regulate the trail traffic. Stop signs on the trail are enforced through the Code of Virginia §46.2-924 and Falls Church City Code Section 26-109. The 1.5 mile section of the trail within the City of Falls Church is unique in that it crosses roadways several times, causing cyclists, pedestrians, and motorists to encounter one another far more often that on other stretches of the trail. Police remind trail users that cyclists are required to wear helmets, stop at stop signs, and announce when they are passing. They also suggest users move off the trail if they choose to stop. Additionally, they warn that racing or competitive speed training is not permitted on the trail; that pedestrians have the right of way unless otherwise posted; and that users should ride at speeds appropriate for the trail's congested nature.
Posted by Jeff Heil at 8:01 AM