Clear with some icy patches 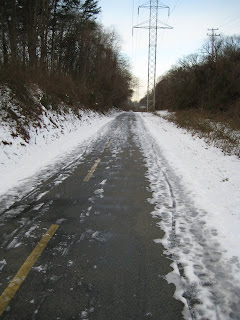 Well, much of the trail is clear, or has a clear path through the icy bits. A few places, particularly between Gallows and Cedar, are icy from edge to edge, but they are short enough that you can either carefully navigate it or walk it.

One thing to be wary of is that it's frozen enough that the footprints and tire tracks are solid bumps and grooves, and they will jar you and cause your wheels to go in surprising directions if you're not careful.

There is a chance of more snow this evening (Thursday), but not a great chance, so it might get trickier. 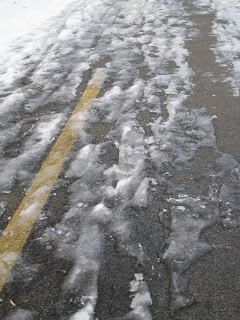 Also today I spotted a small flock of juncos and a young fox ducking into the brush. A good ride in.

The first photo is taken near mile 10, between Gallows and Cedar, showing both clear and covered trail. The second is a closeup of the nature of the surface in such stretches.
Posted by Tim at 10:48 AM

Well, as you might guess, the trail is a mess after Thursday's snow. I rode to and from work on Friday, and most of the trail from Falls Church to Vienna is still covered. Friday morning was particularly messy when I rode in at around 9:30... a thick, semi-frozen-yet-slushy mix that made riding, even with studs, a challenge. I found that I was either getting bogged down by slush where other people had NOT passed, or had my wheels knocked around by bumps and tires tracks where they HAD. Ugh. The best thing I can say is that I certainly got my exercise yesterday morning! It actually took me about twice as long as usual.

The ride home was considerably better. Things had been packed down a bit more, and it was cold enough to freeze, so getting stuck in slush or snow was less of a problem by far. I still wouldn't describe it as smooth, but it's much better, and there are now some open patches of pavement. It's tricky sometimes at night, as you can't see what's coming quite as well, but I think that might actually have some benefit, in that you sail on, blissfully unaware of a hazard, and thus don't tense up, which is half the challenge to riding on snow or ice.

We're supposed to get a little snow today, and it's supposed to stay cold, so I doubt it's going to change a lot out there today. Be careful, but have fun.
Posted by Tim at 7:52 AM

Bare Trees and a Fox 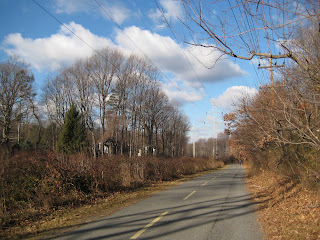 Not a lot of folks on the trail these days... mostly walkers and a few runners, at least by the time I'm on the trail in the morning (9am) or evening (7 or 8pm). And as y0u can tell, the leaves are basically all gone.

This morning I saw a pretty big, healthy-looking fox crossing the trail near where the den was last spring. He scrambled up the embankment and looked down at me... until I stopped to try to get a picture, when he vanished. I wonder if this is one of last spring's kits or their mom or dad. Pretty big, and I don't know how quickly they reach adult size.
Posted by Tim at 2:05 PM