Snow on the trail 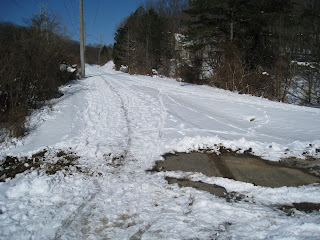 The snow on the Trail is now packed and icy and will take several days to melt. The plowed spot in the photo is from a Reston Association plow; they end their plowing at the trail edge. Somehow the Reston Association has figured out a way to keep their trails clear all winter. They purchased a used trail snow plow and use it when there is an accumulation of snow on their 55 miles of trails (more than the total length of the W&OD Trail). According to the trail manager, there is no noticeable damage to the trails and no additional maintenance is needed because of the plowing.

One reason NVRPA says that the Trail is not plowed is to allow cross country skiers to use the trail when it snows. You can't see it from the photo, but there were ski tracks on the trail; the unpaved gravel trail to the right. Do cross country skiers really need two trails? There was no evidence of skiing on the main trail and it wouldn't be feasible because of all the foot tracks (and a couple of mountain bike tracks).

There are other issues involved in the decision to plow the Trail, but I seems like they can be overcome. Anyone willing to write a Transportation Enhancement grant application for funds to plow the trail?
Posted by Bruce Wright at 1:45 PM